LTRP Note: The following news story is posted, not as an endorsement of the content but for informational and research purposes. The implications of this story are staggering in that Congressman Tim Ryan (D) hopes that other congress members will benefit from his book on mindful meditation. With eastern-style meditation now in the public schools, in the health industry, in the business world, and in the military, Ryan’s efforts will accelerate it being welcomed wholeheartedly in government. And with the Christian church welcoming it with open arms through the spiritual formation movement, the results are that an entire society is being saturated in occultic meditation.

Tim Ryan’s book, A Mindful Nation, is no half-hearted book on meditation. On the contrary. It is published by THE publisher for New Age books, Hay House (which publishes books by Eckhart Tolle, Wayne Dyer, Neale Donald Walsch, Caroline Myss, and many other New Age teachers) and carries a foreword by zen teacher Jon Kabat-Zinn. Ryan says that there is a “quiet revolution” going on in America. He is referring to the explosion of eastern-style meditation in all areas of life. He believes that meditation should be taught to all, including young children.

2nd LTRP Note: In the article below from CBS, it states that almost 10 million are practicing meditation in the U.S. However, in a 2009 U.S.A. Today article, “‘Mindfulness’ meditation being used in hospitals and schools,” it states that “A government survey in 2007 found that about 1 out of 11 Americans, more than 20 million” practiced some form of meditation. 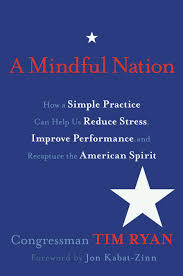 YOUNGSTOWN, Ohio – In the challenge of slowing down the hectic pace of life, it can often seem as though we’ve squeezed out any time for thoughtfulness and contemplation as we go about our daily lives. But one man’s got an idea how to change that and perhaps the power to do so.

In the tranquility of his living room in Youngstown, Ohio, 39-year-old Tim Ryan is conducting his 30-minute morning ritual. He is meditating: slowing his breathing and clearing his head of clutter.

“How much faster literally can we go, until you are so distracted all the time that you’re actually missing your life?” he asked.

If this all looks and sounds a bit New-Agey, guess again. Congressman Tim Ryan will tell you the New Age is now. “It’s a quiet revolution that’s happening,” he said.

Ryan is a former high school football hero from a shot-and-a-beer district who’s now written a book on mindfulness. The group he thinks could benefit most from reading it? His colleagues on Capitol Hill.

“Yeah, that’s true. It’s a problem,” he said about Washington, a city that is probably less introspective. “And I think if you look back at our country to the big mistakes that we made, it seems to me that we weren’t seeing things quite clearly.” Click here to continue reading and to watch video (also see video below).