On August 5th-9th, the Assemblies of God will be holding their 2013 General Council conference titled Believe. Lighthouse Trails has written a number of times about the upcoming conference since April of this year. At the end of this report, we have listed the links to those past reports. Basically, our concern has focused on the fact that contemplative pioneer Ruth Haley Barton is one of the speakers at this year’s AOG event. We have given ample evidence to show why there is cause for concern, and we have explained the serious implications of the Barton invitation. Today, we are issuing one final plea to AOG leadership regarding this matter. The information in today’s report is vital.

Before we begin, no one should think that this is the first time AOG leadership has promoted a contemplative/emerging  author. This has been an ongoing problem for sometime (although the Barton invitation is probably the most pronounced). For example, there are several instances within the Assemblies of God seminary that show an affinity toward contemplative spirituality and the emerging church. And the Gospel Publishing House (the publishing arm of AOG) website sells a number of books from authors in the emerging/contemplative camp.

Incidentally, on the Network for Women in Ministry website (that’s the AOG women’s group responsible for inviting Ruth Barton to this year’s General Council conference), a “Suggested List for Further Reading”  offers Celebration of Discipline by Richard Foster (where he says “we should all, without shame, enroll in the school of contemplative prayer”), Prayer: Finding the Heart’s True Home by Foster (his primer on contemplative prayer), a book by Henri Nouwen, and a book called The Contemporaries Meet the Classics on Prayer, which includes writings by many contemplative proponents: Nouwen, Foster, Marjorie Thompson, Brother Lawrence, Calvin Miller, Dallas Willard, Mother Teresa, Evelyn Underhill, and Thomas Merton.

Now, onto the information we are compelled to share in this report. It may seem trivial to some at first, but if you read through this report, we think you will see the significance.

In Ruth Haley Barton’s book Invitation to Solitude and Silence (the book where Barton acknowledges Thomas Keating’s influence in her life),  Barton quotes the late Catholic priest William Shannon from his book Silence on Fire  (the biography of Thomas Merton). 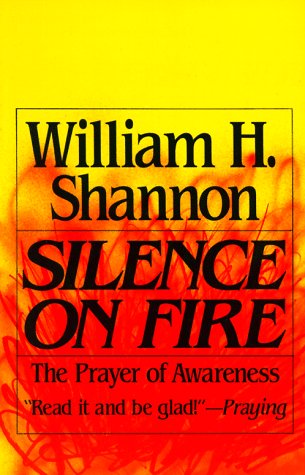 Wordless prayer … is humble, simple, lowly, prayer in which we experience our total dependence on God and our awareness that we are in God. Wordless prayer is not an effort to “get anywhere, ” for we are already there (in God’s presence). It is just that we are not sufficiently conscious of our being there.1 (emphasis added)

Shannon’s comment here is the typical statement by mystics of all religious backgrounds, i.e., that God is already inside each one of us (all mankind), and we just need to become aware of it. It is a panentheistic view. We can illustrate this further when Shannon says:

Shannon, founder of the International Thomas Merton Society, did not believe in the biblical view of God as we will show below. When he speaks of “separate identities disappear[ing],” he means that there is only one identity – God and that God and man are mutually the same.  This is classic Buddhism or Hinduism. In A Time of Departing, Ray Yungen addresses Shannon’s panentheistic beliefs:

[In William Shannon’s book, Silence on Fire], he relates the account of a theological discussion he once had with an atheist groom for whom he was performing a wedding ceremony. He told the skeptical young man:

“You will never find God by looking outside yourself. You will only find God within. It will only be when you have come to experience God in your own heart and let God into the corridors of your heart (or rather found God there) that you will be able to ‘know’ that there is indeed a God and that you are not separate from God.”

This advice is no different from what any New Age teacher would impart to someone who held an atheistic point of view. You want God? Meditate! God is just waiting for you to open up. Based on Shannon’s own mystical beliefs, he knew this was the right approach. He alluded to this by explaining that the young man would find enlightenment if he would look in the right place or use the right method.3

In Shannon’s book, Seeds of Peace, he reiterates this same view:

This forgetfulness, of our oneness with God, is not just a personal experience, it is the corporate experience of humanity. Indeed, this is one way to understanding original sin. We are in God, but we don’t seem to know it. We are in paradise, but we don’t realize it.4 (emphasis added)

You will find this mindset in contemplative teachers across the board. This being in God has nothing to do with a personal relationship with Jesus Christ through faith. Shannon isn’t saying this to born-again Christians. This union with God is a blanket declaration for all of mankind, with or without a Savior. We are all in God.

Shannon contrasts the spirituality of devotion (placating God with good works) with “contemplative spirituality,” the latter where God is identified as “the ground of all being”5 and the core of everything there is (man is naturally connected with God). Contemplative mystics, such as Shannon and Merton, teach that all you have to do to find this union with God is use the mystical technology which connects you with your “true self” (i.e, your own divinity). Bernard of Clairvaux, contemplative mystic from ages past, said that God is “the stone in the stones and tree in the trees.”6 In other words, God exists in everything and is the essence of what we see – there is no distinction between God and His creation. We know from Scripture, however, that this untrue. Isaiah 42:8 declares, “I am the LORD: that is my name: and my glory will I not give to another.” Yungen points out, “Creation can reflect God’s glory (Isaiah 6:3), but it can never possess God’s glory. For that to happen would mean God was indeed giving His glory to another.”7 Paul, the apostle, solidifies the distinction between God and creation when he warns of those who worship the creature (creation) rather than the Creator (Romans 1:25).

What this boils down to is this: In the writings of these mystics – the ones Ruth Haley Barton admires, quotes, and gleans from – there is nothing promoting the Gospel or the message of the Cross. Rather, a cosmic “Christ,” which revolves around a panentheistic, interspiritual outlook, is uplifted and glorified. There is nothing truly Christian about the teachings of Merton, Keating, Shannon, and Tilden Edwards. And let us make something clear – these mystics don’t hide their propensities. It isn’t in some secret code or subtle message. On the contrary, they are forthright and bold about their stance.

If these mystics whom Barton admires are so open about their views, how is it she is drawn to them so consistently in her own spiritual walk? No doubt, she has read their books, so she must know what they really stand for. A lover of God’s Word would not be drawn to those who reject the message of the Cross. That’s right, reject. In Silence on Fire, the very book from which Barton quotes William Shannon, Shannon says:

This [the traditional biblical view]  is a typical patriarchal notion of God. He is the God of Noah who sees people deep in sin, repents that He made them and resolves to destroy them. He is the God of the desert who sends snakes to bite His people because they murmured against Him. He is the God of David who practically decimates a people. . . . He is the God who exacts the last drop of blood from His Son, so that His just anger, evoked by sin, may be appeased. This God whose moods alternate between graciousness and fierce anger. This God does not exist.8 (emphasis added)

You see, overall, the contemplatives reject the notion that God sent His Son to a violent death as a penalty for OUR sins. While they may say that Jesus was a good example of servanthood, they reject His death as an atonement for others. This anti-atonement view is pervasive among the mystics.9 That is because you cannot have it both ways: you cannot have a Gospel of salvation through the death of a Savior for man’s sins and also say that God exists in all things and that man is divine. It just won’t work. The mystics and New Agers know that – but how ironic – the Christian leaders don’t!

Listen to another man who trained Barton – Tilden Edwards, co-founder of the Shalem Prayer Institute:

In other words, in this contemplative state, the East and the West meet. The word “cosmic” often carries with it a silly childish connotation (remember, baby boomers who grew up with Buck Rogers and his cosmic ray gun). But here the word cosmic or cosmos carries a deeper meaning where the “cosmic Christ” is not an individual – it is a consciousness, and it can only be grasped in the meditative state.

We’ll leave you with this question: Is it not utterly amazing (and almost unbelievable) that Ruth Haley Barton has gained access to the hierarchy of the Assemblies of God denomination, where the General Superintendent, Dr. George Wood, insinuated that those under him should not consider the evidence that Lighthouse Trails provided. But, just because someone tells others not to listen doesn’t change the facts. Either they are true, or they aren’t true; and ignoring the facts doesn’t make them go away.

[B]e not conformed to this world: but be ye transformed by the renewing of your mind, that ye may prove what is that good, and acceptable, and perfect, will of God. (Romans 12:2 – emphasis added)

2. William Shannon, quoted in The Message of Thomas Merton, p. 200.

Our past reports on the Barton/AOG issue:

May 26th – Will Assemblies of God Leaders Ignore Contemplative Evidence?