“…they glorified him not as God, neither were thankful; but became vain in their imaginations, and their foolish heart was darkened.  Professing themselves to be wise, they became fools, and changed the glory of the incorruptible God into an image made like to corruptible man, and to birds, and four-footed beasts…. ” Romans 1:21-23 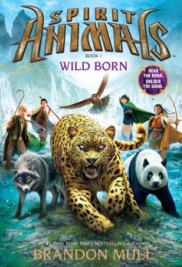 One of today’s most effective “change agents” is Scholastic Inc. which published the Harry Potter series a decade ago. This year it offers our schools and our children a new reading series titled Spirit Animals, which may prove to be just as seductive as the Hogwarts tales. Authored by Brandon Mull, its first book is titled Wild Born. Its back cover offers the following summary:

“In the world of Erdas, four children are about to discover if they have a spirit animal bond, a rare link between human and beast that gives great powers to both. Separated by vast distances, Conor, Abeke, Meilin, and Rollan each see a flash of light… and then the animals emerge.

“Wolf, leopard, panda, falcon. Each of the children has summoned a beast from legend. Now their fate is set. The four new heroes and their animals just band together on a dangerous quest. A dark force from the past is rising and only they have the power to stop it.”

In the first chapter of Wild Born, the people of Trunswick (in a world called Erdas) are gathering in the square to watch the rare but magical Nectar ceremony. The goal of this most sacred rite was to witness the mystical calling of a spirit animal. If indeed the mysterious animal appeared, the chosen person would be bound to that animal for life. Through their mystical union, they would strengthen and equip each other for the battles ahead.

Young Lord Devin, the spoiled son of the earl of Trunswick, was the first to drink the mysterious Nectar. Hoping that a spiritual transformation and a public celebration would follow, he was angry and embarrassed when no animal answered his call.

Suddenly a massive wolf with strange blue eyes appeared. It padded toward Conor and licked his palm as if he recognized the boy as his new partner. This was no ordinary wolf, for Briggan the Wolf was already known as one of the “great Beasts.”

A voice rang out in celebration: “Good people of Trunswick! News of this day will echo across all of Erdas! In our hour of need, Briggan has returned!”

And just in time! A war was spreading fast, and the “good” masters of magic — be they man or beast — must take their stand.

This deadly war between “good” and “evil” continues throughout the series. But remember, from a Christian perspective, both sides are occult. The main difference is simply the fact that the “good” side of evil seems far more less threatening to children than the dark and scary side. Click here to continue reading and for endnotes.