Remember to Pray for the People in the Philippines

Let us remember to pray for the people in the Philippines who have been affected by the typhoon. May those who know the Lord keep their eyes on Him and help others to find Him by sharing the Gospel and the love of God, and may many who do not know Him turn their lives over to Him in a true and sincere way. 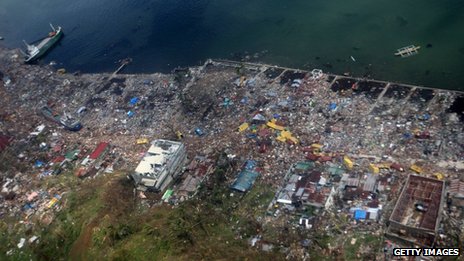 “An enormous four-metre storm surge swept into the coast, crushed all of these buildings”, reports Rupert Wingfield-Hayes. The head of the Red Cross in the Philippines has described the devastation caused by Typhoon Haiyan as “absolute bedlam”.

Up to 10,000 people are believed to have died in Tacloban city and hundreds elsewhere. Hundreds of thousands of people are displaced.

The typhoon flattened homes, schools and an airport.

It has since made landfall in northern Vietnam, near the Chinese border, where it has weakened to a tropical storm.

Four million people have been affected in the Philippines, and many are now struggling to survive without food, shelter or clean drinking water.

A huge international relief effort is underway, but rescue workers have struggled to reach some towns and villages cut off since the storm.

“There’s an awful lot of casualties, a lot of people dead all over the place, a lot of destruction,” Richard Gordon, head of the Philippine Red Cross, told the BBC.

“It’s absolute bedlam right now, but hopefully it will turn out better as more and more supplies get into the area.” Click here to continue reading.