On February 21st and 22nd, Multnomah University (formerly called Multnomah School of the Bible) in Portland, Oregon, once considered a biblically-based evangelical school, will be hosting the simulcast Justice Conference with speakers Lynn Hybels and Jim Wallis (both emergent leaders who are part of the “Christian Palestinian” movement). Other emergents such as N.T. Wright will also be at the Justice Conference.

Multnomah has been making a steady decline toward all things emergent for some time. Lighthouse Trails has included Multnomah in a number of reports over the last few years dealing with the contemplative prayer issue, including this one from 2012: “Multnomah University Teaches Lectio Divina in Chapel Throughout 2012.”

But as is always the case, when an organization goes contemplative, the next step is the embracing of emerging theology (which Roger Oakland shows in Faith Undone), one of which is taking an anti-Israel approach. This is why Lighthouse Trails recently decided to carry Caryl Matrisciana’s powerful and courageous new documentary Exposing Christian Palestinianism (see trailer directly below). When you consider how leaders throughout the world are beginning to call out for the boycott of Israeli goods and services, accusing Israel of committing atrocities against mankind coupled with the memory of Adolph Hitler doing virtually the same thing to the Jews in Germany, one cannot help but realize the dire situation the world is in today.

You can order this DVD by clicking here. 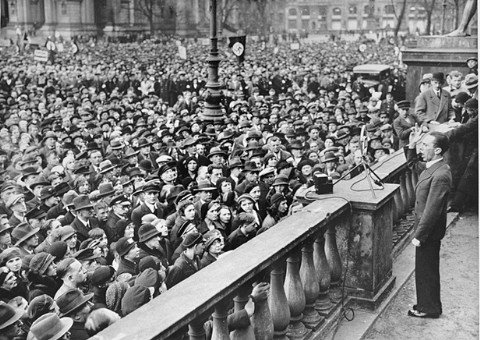 On April 1, 1933, a week after Hitler became dictator of Germany, he ordered a boycott of Jewish shops, banks, offices and department stores. But the boycott was mostly ignored by German shoppers and was called off after three days. However, the unsuccessful boycott was followed by a rapid series of laws which robbed the Jews of many rights.

On April 7, “The Law of the Restoration of the Civil Service” was introduced which made ‘Aryanism’ a necessary requirement in order to hold a civil service position. All Jews holding such positions were dismissed or forced into retirement.

On April 25, a law against the overcrowding of German schools placed severe limits on the number of young Jews allowed to enroll in public schools.

On June 2, a law prohibited Jewish dentists and dental technicians from working with state-run insurance institutions.

On May 6, the Civil Service law was amended to close loopholes in order to keep out honorary university professors, lecturers and notaries.

On September 28, all non-Aryans and their spouses were prohibited from government employment.

On September 29, Jews were banned from all cultural and entertainment activities including literature, art, film and theater.

In early October 1933, Jews were prohibited from being journalists and all newspapers were placed under Nazi control. (source-The History Place)

Some Various Out of House Articles on the Boycotting of Israel:

Bill to block federal funding to universities that boycott Israel

Is the Obama Administration Condoning Sanctions and Boycotts Against Israel

When Hitler Was in Power by Anita Dittman

Christians in Holland in 1941: “Should We Help Save the Jews?” by Diet Eman