Mysticism, Monasticism, and the New Evangelization From Rome 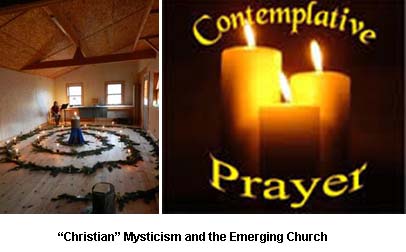 By Roger Oakland
Understand the Times

For years I have been following the agenda designed to implement the New Evangelization Program initiated by Pope John Paul II and the Roman Catholic Church. This same program was continued by Pope Benedict and Pope Francis and is a plan to reach Roman Catholics who have “strayed away” and also to evangelize people of all faiths. The goal is to set up the Kingdom of God with headquarters in Rome so that all religions worldwide will eventually bow down and worship the Roman Catholic Eucharistic Christ.

For those who are not familiar with the term the Eucharistic Christ, this entity is formulated by a priest after the process of transubstantiation. This object, which is worshipped as “Jesus Christ,” is nothing more than a wafer that is placed in a container called a monstrance and worshipped and adored as “Jesus Christ.” This obviously is not the Jesus we know and understand from the Bible. Eucharistic adoration is a tradition of the Roman Catholic Church. When participants stare at the monstrance, they believe they are adoring or worshiping “Jesus.” In the Bible, such a practice would be described as idolatry.

Many people think of Christian mysticism and monasticism as strictly “in-house” matters, too remote and esoteric to have any bearing on the Church’s re-evangelization of the post-Christian West. While Catholics generally respect the contemplative vocation, they may see it as peripheral to supposedly more urgent concerns, such as improving catechesis and the liturgy, or bearing witness to faith and morality in public life. Those concerns are critical. But we believe the New Evangelization of historically Christian countries also requires a rediscovery of Christian mysticism, and a revival of the monastic setting which is its natural home. [2]

So these words written by author Benjamin Mann help connect the dots and show the New Evangelization goes hand and hand with the promotion of mysticism and monasticism. No speculation is required. The facts speak for themselves. However, this is only the first clue in the article. There are numerous others. The article continues:

The Church has a new task in our time: to re-evangelize regions that are falling away from the faith. Most inhabitants of this post-Christendom are not atheists: many of them are open to “spirituality,” though skeptical toward “religion.” This public hunger for spirituality reflects a legitimate need. Christians must rediscover the mystical core of the Gospel, and present it to the world through the witness of monasticism. We have written this article to outline the urgency of both tasks, and their inseparability from one another. To re-evangelize the West, the Church must recover its mystical heritage – but this task requires contact with the living monastic tradition. Monasteries are thus essential to the New Evangelization.[3]

So it is obvious for anyone with a reasonable mind to see the connection between the Roman Catholic New Evangelization Program and the Emerging Church movement that has swept the world and impacted so many churches and denominations. In fact, perhaps another way to describe the Roman Catholic New Evangelization Program could be – the seductive Jesuit scheme to bring the separated brethren back to the “mother of all churches” through the re-introduction of contemplative mysticism and monasticism rooted in Roman Catholicism.

This emphasis is made clear through the words used in this article. The author enthusiastically encourages his readers to abandon the Scriptures and jump on the mystical-experiential bandwagon by stating the following:

Worse still, many Christians share this ignorance. They neglect their own mystical tradition, often due to misconceptions about what it actually is. Unschooled in their own rich spiritual heritage, they cannot evangelize those for whom “spirituality” and “religion” are at odds. This ignorance of mysticism must cease, especially if we care about the New Evangelization of historically Christian nations, which are now the breeding-ground for “spirituality without religion.”[4]

Then the following statement is added as an exclamation point:

Monasticism has always been a privileged vehicle for the transmission and spread of mystical spirituality, especially among Eastern Christians. Our tradition exists to foster the same intimacy with God that the first hermits sought in the Egyptian deserts. The same is true of traditional Western monasticism, especially in the Benedictine lineage which drew so much from the Desert Fathers. We hope that the Western Church will rediscover its own great monastic tradition, and the practical mysticism at its core. Nothing else will suffice for the evangelization of those who seek “spirituality” but mistrust “religion.” Indeed, nothing else will satisfy the needs of the human soul. [5]

Perhaps you have never heard about the New Evangelization Program and the Roman Catholic plan to win the world to the Eucharistic Christ that is supposed to establish the Kingdom of God here on planet earth. Maybe this commentary has provided some facts that shed light into the darkness. Has your church or pastor made reference to contemplative spirituality? Have you been introduced to the ideas of Roman Catholic mystics (such as Thomas Merton or Henri Nouwen), discussed the concept of monastic disciplines, or taught how to get closer to God through uttering repetitive words or phrases?

If so, maybe it is time to wake up and recognize what is happening! Is it possible your church has joined hands with Rome and become agents of the New Evangelization Program? If you don’t know the answer to this question, then think about this seriously.

Spiritual delusion is happening worldwide as part of the Last Days scenario which we are headed toward.