A Lighthouse Trails concerned reader has informed us that this month the Christian Missionary Alliance Mahaffey Family Camp has invited New Age sympathizer Leonard Sweet as a camp speaker. CMA has been going down the contemplative/emerging path for a long time. In fact, CMA is listed on the Lighthouse Trails 50 Top Contemplative-Promoting Organizations. Also speaking at the camp this summer will be CMA president John Stumbo. (See below for links to previous news stories on CMA.)

For those who are not familiar with the teachings and beliefs of Leonard Sweet, the article “The Quantum Christ: Entering the World AND the Church Through Popular New Age & Christian Leaders” written by Warren B. Smith is a good starting point. Also “Why We Should Be Very Concerned About Leonard Sweet and Rick Warren … and Their Plans for the Future” will help.  The following quotes are from Leonard Sweet’s book Quantum Spirituality, an older book but one he still carries and promotes on his website. After reading these quotes, ask yourself if these are the kind of ideas that belong at a Christian Family Camp. As you read these, keep in mind that in Quantum Spirituality, Sweet  lists several New Agers and mystics as his “New Light” heroes and leaders including Matthew Fox, Morton Kelsey, M. Scott Peck, Willis Harman, and Ken Wilber.

“The first of these five untheorized observations is that New Light embodiment means to be “in connection” and ‘in-formation’ with other Christians. Deeper feeling and higher relating go together. The church is fundamentally one being, one person, a comm-union whose cells are connected to one another within the information network called the Christ consciousness.” — P. 122

“Energy-fire experiences take us into ourselves only that we might reach outside of ourselves. Metanoia is a de-centering experience of connected-ness and community. It is not an exercise in reciting what Jesus has done for me lately. Energy-fire ecstasy, more a buzz than a binge, takes us out of ourselves, literally. That is the meaning of the word ‘ecstatic.'” — P. 93

Note: This ecstasy Sweet speaks refers to the New Age ecstasy that occurs in an altered state of consciousness.

The power of small groups is in their ability to develop the discipline to get people “in-phase” with the Christ consciousness and connected with one another. P. 147

New Lights offer up themselves as the cosmions of a mind-of-Christ consciousness. As a cosmion incarnating the cells of a new body, New Lights will function as transitional vessels through which transforming energy can renew the divine image in the world, moving postmoderns from one state of embodiment to another. P. 48

A surprisingly central feature of all the world’s religions is the language of light in communicating the divine and symbolizing the union of the human with the divine: Muhammed’s light-filled cave, Moses’ burning bush, Paul’s blinding light, Fox’s “inner light,” Krishna’s Lord of Light, Bohme’s light-filled cobbler shop, Plotinus’ fire experiences, Bodhisattvas with the flow of Kundalini’s fire erupting from their fontanelles, and so on.” P. 235

To show that Sweet still adheres to the beliefs he wrote about in Quantum Spirituality, may we draw your attention to Sweet’s 2010 book, Nudge. Sweet subtitles the book “Awakening Each Other to the God Who’s Already There.” This is taken from Thomas Merton who believed that God was in every human being and they just need to realize He is already there. Sweet quoted Merton in Quantum Spirituality saying “We are already one. But we imagine that we are not” (p. 13). This is where Sweet was talking about the TOE (the Theory of Everything, meaning the God in all things). It would make perfect sense that he would end that section of his book with that quote by Merton because Merton believed that God was indeed in all things. Listen to this quote by Merton:

It is a glorious destiny to be a member of the human race, … now I realize what we all are.… If only they [people] could all see themselves as they really are … I suppose the big problem would be that we would fall down and worship each other.… At the center of our being is a point of nothingness which is untouched by sin and by illusions, a point of pure truth.… This little point … is the pure glory of God in us. It is in everybody. (Conjectures of a Guilty Bystander, pp. 157-158, taken from A Time of Departing by Ray Yungen) 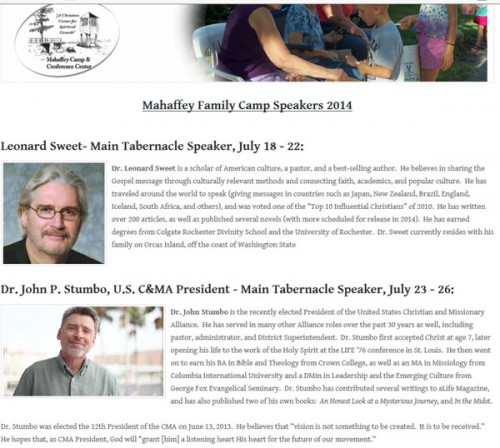 Letter to the Editor: Saddened by Christian & Missionary Alliance and Ambrose University Continuing Plunge into Contemplative

Christian & Missionary Alliance Rob Reimer Loses His Way in “Pathways to the King:” A Review

Letter to the Editor: Christian & Missionary Alliance OK With Ruth Haley Barton and Other Contemplatives