AN EXPLOSION THAT SHOOK THE WORLD – IN MORE WAYS THAN ONE 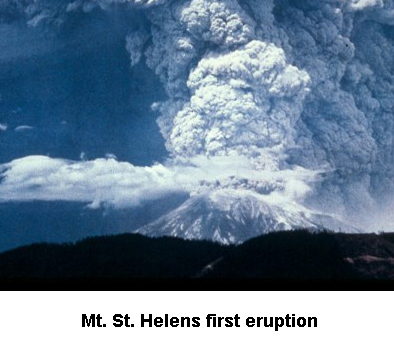 On May 18, 1980, a major catastrophic event occurred in the state of Washington, which exhibited explosive power unprecedented in modern United States history.

Imagine the scenario.  A mountain begins to ripple then slides down the hill in a massive avalanche. Plumes of superheated ash rise rapidly from the summit crater then move horizontally accelerating at high speed. In a matter of moments, trees are flattened in an area covering 150 square miles.

One branch of the avalanche slammed into Spirit Lake, approximately five miles to the northeast of the crater, forcing water out of the lake and shooting 600 feet up the neighboring slopes. Trees, top soil and volcanic debris were washed back into the lake with tremendous force.

The bulk of the avalanche, directed westward, left a deposit of volcanic mud and ash over 600 feet thick. Subsequent eruptions took place over the following months and years, and although less severe, they caused additional mud flows and added volcanic deposition to the area of devastation.

For decades, geology has been based upon the assumption that the layers of the earth represent gradual deposition over extremely long periods of time. For example, when an observer stands at the edge of the Grand Canyon and looks at the vast horizontal layers of the earth that make up the canyon walls, uniformitarian geology proposes that these layers represent hundreds of millions of years of time. Click here to continue reading.