The Dangers of Spiritual Formation?—And Some Ways it is Influencing Your Children

The Spiritual Formation movement is widely promoted at colleges and seminaries as the latest and the greatest way to become a spiritual leader. It teaches people that this is how they can become more intimate with God and truly hear His voice. Even Christian leaders with longstanding reputations of teaching God’s word seem to be succumbing.1—Roger Oakland

Spiritual Formation has become a widely used term that was introduced to the evangelical church in the 1970s, primarily through a Thomas Merton disciple named Richard Foster and his longstanding, best-selling book, Celebration of Discipline. Today, there are few venues in the church that have not been influenced by the Merton/Foster model of Spiritual Formation.

While at first glance, the Spiritual Formation movement seems profitable and spiritual at best, harmless and benign at worst, that is only because it has been disguised with Christian language and out-of-context Scriptures all the while making grandiose claims that through Spiritual Formation, you can really know God.

In a nutshell, Spiritual Formation teaches that in order for someone to have an intimate relationship with God, he or she needs to practice certain “spiritual disciplines” that will help one to become more Christ-like. Sounds good so far, right?

What many people don’t really know, however, is that the driving force behind the Spiritual Formation movement is a mystical prayer technique called contemplative or centering prayer. The Spiritual Formation leaders, such as Richard Foster, Henri Nouwen, and Brennan Manning, have told their followers for years that we must get rid of distractions in our minds or else we cannot hear the voice of God.

In order to reach a state of silence or stillness (where the mind is basically put into neutral), a word or phrase is repeated (or the breath is focused on) and a meditative (altered) state can then be achieved. But while contemplative advocates insist that this is not the same thing as Eastern-style meditation because their intent is different (they repeat Jesus Jesus, not om om), the results are the same as practicing Transcendental Meditation (TM) and demonic realms are experienced in this silence. One meditation writer explains:

The meditation of advanced occultists is identical with the prayer of advanced mystics; it is no accident that both traditions use the same word for the highest reaches of their respective activities: contemplation [samadhi in yoga].2

That’s a little background of the Spiritual Formation (i.e., contemplative prayer) movement. Although the dangers of this mystical spirituality should be obvious to most Christians, it appears this is not the case, and children have not been exempt from the impact. Evangelical youth groups, children’s organizations, Sunday School curriculum, books, and so forth are introducing contemplative spirituality (i.e., Spiritual Formation) to children.

For instance, in a book titled, Perspectives on Children’s Spiritual Formation, Greg Carlson and John Crupper (executive leaders of the Awana’s children organization at the time the book was written) praise Richard Foster’s contemplative-promoting book Streams of Living Water. Carlson and Crupper also say that the contemplative “tradition” is an important contribution to Christians:

[W]e would see many of the techniques [from the Contemplative-Model] of teaching as valuable tools for learning . . . the ideas of repetition and routine . . . are important; and we affirm them.5 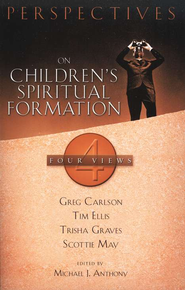 Perspectives on Children’s Spiritual Formation identifies some of these “techniques” and “tools” as lectio divina, centering prayer, labyrinths, the Jesus Prayer, and breath prayers, all of which are part of contemplative spirituality.

Incidentally, in one section of the book, it favorably references the Catholic mystic Thomas Merton, who once said that he “intend[ed] to become as good a Buddhist”6 as he could and that he “was impregnated with Sufism.”7 Merton never hid his admiration for Eastern-style meditation or his panentheistic beliefs (that God was in all humanity). For Awana leadership to co-author a book that speaks highly of Thomas Merton shows little discernment or understanding.

Even though Carlson and Crupper are no longer in executive leadership roles with Awana, the book is still on the market today. Plus, Awana is referred to several times in the book so someone reading it would believe that Awana itself has given an OK to contemplative.

While it is troubling to see this kind of pass on contemplative spirituality by Awana leadership, calling it a “significant contribution” that has “played an important part” in the church, I believe there are many local Awana leaders who are not compromising their teachings and are staying true to God’s Word. Perhaps they will be the ones to help Awana stay on the right path.

One Christian group that has pushed contemplative spirituality onto children is NavPress. In one issue of their PrayKids! publication, an article titled, “Contemplative Prayer” states:

Contemplative prayer is a form of meditative prayer that focuses on communing with God. Although sometimes confused with its Eastern (and non-Christian) counterpart, true Christian meditation has been practiced since Bible times.

This issue of PrayKids! helps kids learn to slow down their fast-paced lives long enough to experience a meaningful relational encounter with their Heavenly Father.8

In one feature article in Pray!, “Empowering Kids to Pray,” Brad Jersak is referenced in relation to kids and prayer. Jersak’s book, Stricken by God (endorsed by emergent church figure Brian McLaren) is a compilation of essays by various authors including Eastern-style meditation proponents Richard Rohr and Marcus Borg. Borg rejects basic foundational tenets of Christian doctrine (such as the virgin birth of Christ and the atonement),9 and Rohr is a panentheistic Catholic priest who embraces interspirituality and mysticism.

Considering that NavPress, the publishing arm of the Navigators, has a publication for children specifically to teach children contemplative prayer illustrates how integrated the New Spirituality has become within Christianity.  Children in the church are being targeted. This is tragic—church is supposed to be one of the safest places for our children.

And it doesn’t get better as they get older. Unaware parents who are anticipating their children attending “good” Christian colleges when they are old enough may be very surprised and rudely awakened to find that Spiritual Formation has now entered almost every accredited Christian college, seminary, and university. My publisher, Lighthouse Trails, has been following this trend for over 12 years now and has discovered that some of the top accreditation associations for Christian schools are requiring Spiritual Formation programs to be implemented in schools now before they can be accredited!10 Students in Christian colleges are now being required to study the works of Henri Nouwen and Richard Foster and to take practicum courses in contemplative and centering prayer where they may be required to practice contemplative prayer for a passing grade.

Pray for discernment and guidance, and use the ideas on how to protect your children from spiritual deception that I have laid out in my book to make sure your child is equipped and “armored” to face what is now so prevalent in evangelical/Protestant Christianity.