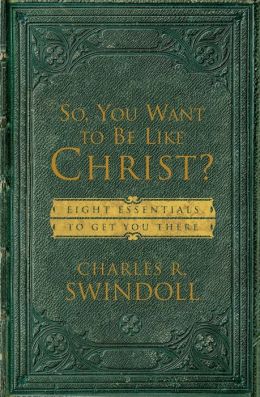 In Chuck Swindoll’s book, Wisdom for the Way, in a section titled “Segments of Solitude” (p. 14),  Swindoll states: “Henri Nouwen called solitude . . . ‘the furnace of transformation.'” A LT article, “Why Christian Leaders Should Not Promote Henri Nouwen” helps to clarify the serious problem with Henri Nouwen’s “solitude” and “transformation” meaning.

A caller once told Lighthouse Trails she had heard that Chuck Swindoll said he wants to “get back to Bible basics.” We told the caller that if Chuck Swindoll really means that, then he will make sure that his book So You Want to Be Like Christ: Eight Essential Disciplines to Get You There will be removed from the market, and he would begin speaking publicly recanting his promotion of contemplative spirituality in that book.

In So You Want to Be Like Christ, Swindoll favorably quotes spiritual formation (i.e., contemplative prayer) pioneers Richard Foster and Dallas Willard. Swindoll calls Celebration of Discipline by Foster a “meaningful work” (p. 15) and Willard’s book The Spirit of the Disciplines “excellent work” (p. 13). In chapter three,”Silence and Solitude,” Swindoll talks about “digging for secrets … that will deepen our intimacy with God (p. 55). Quoting the contemplative poster-verse Psalm 46:10, “Be still and know that I am God,” Swindoll says the verse is a call to the “discipline of silence.” As other contemplative proponents have done, he has taken this verse very much out of context as Larry DeBruyn explains in his article “Be Still.”

Swindoll goes on to say that we “discover who God is” when we “commit ourselves to periods of absolute, uninterrupted silence” (p. 61). Swindoll suggests that we cannot really know God without the “stillness” and the “silence.” Beth Moore said the same thing in the Be Still DVD. It’s common among contemplatives to say this. But as Ray Yungen points out, “It is not the silence that draws us closer to God . . . Scripture clearly teaches that it is only through the blood atonement of Jesus Christ that we can gain access to Him” (p. 191, A Time of Departing). Richard Foster teaches that anyone can connect to God through contemplative prayer – it is not just for believers of Jesus Christ.

In a section of So You Want to Be Like Christ called “Ministry of Silence” (p. 64), Swindoll quotes Henri Nouwen, a Catholic priest who had strong affinity and experience with mysticism. Swindoll quotes Nouwen from his book The Way of the Heart, Nouwen’s primer on contemplative prayer. Swindoll wraps up that section by saying, “I do not believe anyone can ever become a deep person without stillness and silence” (p. 65). Lest you think that Swindoll is referring to going to a quiet place (like sitting beside a stream or turning off the television) when he says silence, he differentiates solitude (outer quietness) and silence (stilling the mind) in his book. He admits that silence is referring to an inner silence of the mind. All contemplatives (and New Age meditators for that matter) know that stilling the mind or putting it in neutral can only be done with some form of mantric-like meditation, breath prayers, or focusing on something to eliminate thought and distractions, thus going into the silence.

Maybe the rumor got started that Chuck Swindoll wants to be more biblically sound because of his book, The Church Awakening: An Urgent Call for Renewal (which came out after So You Want to Be Like Christ). With a title like that, we could see where some might think Swindoll is referring to a return to truth. And in fact, in that book Swindoll does make a case for the Bible. In chapter three, he states: “[W]hen the inerrant word of God is not our standard for truth, erosion will creep in. It will eventually crowd out the truth” (p. 87). Sadly, in this book, Swindoll quotes favorably six times from Eugene Peterson’s book The Message. Talking about the inerrancy of Scripture in one breath then sprinkling the book with someone who openly endorses The Shack sends out a confusing message to say the least. The Shack author has openly rejected the substitutionary atonement of Christ. Eugene Peterson is also an advocate for contemplative spirituality; he endorsed the back cover of New Age goddess worshiper Sue Monk Kidd’s contemplative book, When the Heart Waits.

On page 260 of The Church Awakening, Chuck Swindoll asks the question: “What is needed in the ranks of ministry? A massive repentance . . .!” he answers. He then immediately quotes Eugene Peterson. Something is very wrong here. If Chuck Swindoll is turning to Bible basics, then shouldn’t he pull So You Want to Be Like Christ from the market before any more people are influenced by it? And shouldn’t he stop quoting and referring to people who promote messages such as that in The Shack.

Many of those participating in this fiasco of no discernment are highly educated men and women. But education is not the key to understanding the times and discerning spiritual deception. These leaders would probably not agree with that. A few years ago, Bible teacher and pastor Erwin Lutzer contacted Lighthouse Trails after we had called his office to talk about his endorsement of Larry Crabb’s contemplative promoting book, The Papa Prayer. Lutzer told Lighthouse Trails that day that we were “not qualified to spot spiritual deception.” We assumed he meant we did not have the educational credentials to spot spiritual deception. But we must contend with this view. Most of the disciples were not highly educated men; yet God allowed them to discern deception. How is it that believers in Jesus Christ are qualified? Meager men and women, appearing foolish to the world . . . and now to Christian leaders.

The apostle Paul talked quite a bit about this in the Bible. In Colossians 1:9, he tells the saints that he was praying for them that they “might be filled with the knowledge of his will in all wisdom and spiritual understanding.” He was praying that they would have discernment (“spiritual understanding”). He did not put a qualifier on there that they would need great education in order to receive this wisdom and understanding. What he did say was that God, the Father, had made us “partakers of the inheritance of the saints in light” (vs 12) and had “delivered us from the power of darkness [i.e., power of deception]” (vs. 13). But what was the key to having this wisdom and spiritual understanding and being delivered from the power of darkness? Paul tells us in that same chapter. He calls it “the mystery which hath been hid from ages and from generations, but now is made manifest to his saints” (vs. 26). What is that mystery? Verse 27 says: “To whom God would make known what is the riches of the glory of this mystery among the Gentiles; which is Christ in you, the hope of glory.” (emphasis added)

It isn’t formal education, from a practical point of view, that gives discernment; it’s being born-again (John 3); it’s receiving Jesus Christ as Lord and Savior (Matthew 10:40); it’s studying, pondering on, and believing the Word of God; it’s having Him living inside you (Revelation 23:20), by faith, through His abundant grace (Romans 5:2). And it is a gift that is offered to “whosoever” will come unto Him (John 12:46). It’s Christ in you, the hope of glory! And to believers He has given His written Word and “the Spirit of truth” (which confirms the Word of God in our hearts – John 14:17; John 16:13 ) .

Paul tells us that we have been reconciled to Him (Colossians 1: 21-22) if we “continue in the faith grounded and settled, and be not moved away from the hope of the gospel” (vs. 23). We beseech Christian leaders who have swayed from the truth through their promotion and embracing of those who teach a false gospel to repent from their ways and return to the solid faith that is “grounded and settled.” Get rid of your books that promote a contemplative mystical spirituality even if you will lose some money (God will supply your needs according to His riches in glory – Philippians 4:19); don’t stand on platforms with those you know are teaching another gospel (better to preach in a brothel than to share a platform with a heretic – see Titus 3:10); don’t tell large crowds that you are a “good friend” with one who is helping to bring in a one world false religion;”1 don’t be part of DVD projects that outwardly promote the dangerous contemplative prayer movement 2; and by all means don’t say you are returning to Bible basics if you leave out one of the most important Bible basics of all.