On January 21st, about 30 of contemporary Christian music’s most well-known singers from the last four decades will be joining New Age sympathizer and devout Roman Catholic Roma Downey for a special live online concert called “We Will Stand.” The concert is being presented by CCM United and has a motto of “One Message, Many Voices.'” According to an article titled “We Are United: The Story Behind ‘The Greatest Night In Contemporary Christian Music,’” there could be over a million viewers with a potential reach globally of 40 million. (Access links at: http://www.thefishomaha.com/content/music-news/we-are-united-the-story-behind-the-greatest-night-in-contemporary-christian-mus#sthash.Q5Ua18wM.dpuf  and http://www.todayschristianmusic.com/features/we-are-united/ .

It is a sad state of affairs when a concert, billed as “the greatest night in the history of contemporary Christian music,” uses a highly New Age- and Catholic-influenced celebrity to help open and close the event, which is basically making a statement to viewers as well as the church at large that Christianity is compatible with all beliefs. But after all, the cry of today’s “new” Christian is unity, unity, unity, with all faiths and at any cost. This concert illustrates the terrible breach in discernment that is happening in Christianity today.

Lighthouse Trails may be writing a follow up report after the concert, which takes place online on January 21st. In the meantime, these 10 points below are 10 reasons why musicians who call themselves Christians should not be sharing a platform with Roma Downey.

From Roma Downey’s Lightworker Media Facebook page; used in accordance with the US Fair Use Act

1. Roma is a devout Roman Catholic who, among other Catholic rituals, prays to Mary, as she describes in this video. Roman Catholicism teaches that Mary is a co-redeemer with Jesus.

As a USM [ University of Santa Monica – a New Age metaphysical school] graduate, I know firsthand the value I received from participating with Ron and Mary  in the Master’s degree Program in Spiritual Psychology. I am so grateful to have Loyalty to Your Soul to sweetly remind me of all I have learned. Let’s just say that I went from playing an angel on TV to living more of an angelic life every day. The teachings in this beautiful book have sent me on a journey to the very center of my own being where, wrapped in the safe wings of Love, I feel as though I have come home.

Downey’s endorsement in the Hulnick’s book is nestled in with full-blown New Agers like Barbara Marx Hubbard, Joan Borysenko, and Gay Hendricks (The Corporate Mystic). (By the way, Neale Donald Walsch, the New Ager who said that Hitler did the Jews a favor by killing them,(1) wrote the foreword to Loyalty to Your Soul.)  Clearly, Downey read this book and resonates deeply with it to say what she did about it. To get an idea of this “journey” that Downey is on, listen to a few quotes from Loyalty to Your Soul:

Center your awareness in your heart and consciously look for the Loving Essence in the person in your presence. By doing so, you’re signifying your respect for the Soul before you . . .  Maintain awareness that you’re in conversation with another Divine Being who is engaged in having a human experience. (p. 209)

We ask for the presence, protection, guidance, and Love of the Divine Beings [spirit guides]  who work with each of us. (from the “Invocation” – emphasis added)

When people speak of spirituality, they simply mean awareness of the sacred reality of the Divine Essence within and beyond all creation. (p. 8, quoting favorably a New Age “spiritual teacher”)

You begin to recognize others as Divine Beings, and the situations and circumstances of your life as learning devices. (p. 31)

Those familiar with New Age teachings will recognize such statements as being the core essence of the occult (that man is divine) and that there are spirit guides who help us through life. Loyalty to Your Soul is a contemporary version of A Course in Miracles (the New Age book Warren B. Smith talks about in his biography, The Light That Was Dark).

3. Roma Downey also endorsed a 2008/2011 book called Angels in My Hair: the true story of a modern day Irish mystic by Lorna Bryne. The book is about spirit guides in people’s lives. 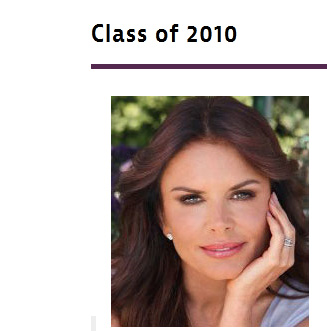 Taken from Santa Monica University website; used in accordance with the US Fair Use Act

4. Roma Downey graduated in 2010 from the University of Santa Monica’s Spiritual Psychology Program. The school was founded by the late New Age spiritualist guru John-Roger Hinkins in 1971 (who also founded the Movement of Spiritual Awareness). Hinkins claimed to have had a spirit guide named Mystic Traveler.  Today, University of Santa Monica  is considered a New Age/metaphysical university. Some teaching points(2) from USM’s Spiritual Psychology program (the program is one of just three degree programs offered at the school):

a. ” If you are interested in really growing as a person and awakening more fully to your Divinity—take this course” (emphasis added).

b. “Soul-centered co-creation [a term used in New Age to signify our equality with God].”

c. “Spiritual Awakening. Designed to provide a practical working knowledge of, and appreciation for, the “giants” in the field of psychology, including Rogers, Perls, Ellis, and [Roberto] Assagioli [a world-famous occultist].”

d. “The Buddhas and the Christs are born complete.(3) 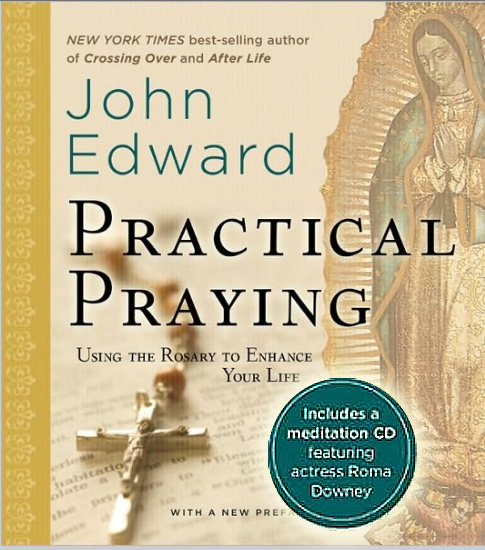 5.  In 2010, Roma Downey did a “meditation” CD for psychic medium John Edward’s 2010 book Practical Praying: Using the Rosary to Enhance Your Life (see video of John Edwards). As of Jan. 17, 2015, John Edward’s is still selling the Practical Praying book advertising Roma Downey’s CD meditation contribution. John Edward is best known for his psychic TV show in which he talked to the dead. Downey has been on his show and allowed him to channel her mother.

6. New Age actress and ordained minister  of a New Thought church, Della Reese, plays a significant role in Downey’s life. In addition to Reese teaming with Downey for 9 years in the popular TV series Touched by an Angel, Reese is Downey’s  daughter’s godmother and also officiated at the wedding of Downey and Mark Burnett.

7. Downey has been on the Oprah Show to promote her and her husband’s production Son of God. Oprah is the most influential New Ager today.

8. Downey and Burnett are proponents of Tony Robbins, a prolific New Ager. “For 25 years, Hollywood power producer Mark Burnett has applied Tony’s strategies to his life. This past year, he decided it was time to invite his wife, Roma Downey, and their 3 children to share in an experience they won’t forget.”(4)

9. Downey resonates with Eckhart Tolle, another very prolific New Age author and teacher. Warren B. Smith has written about Tolle and his New Age/New Spirituality views. One article about Downey quotes her as saying: “My kids go to school about a 40-minute  drive away. I’m open to the group’s opinion about what we listen to on the  way there. On the way back, I get my own selections—books on tape by  Eckhart Tolle, Tony Robbins . . . My husband says I’m so self-realized I’m practically levitating'” (First for Women magazine, 03/31/14, pp. 44-45). To get an idea of what Eckhart Tolle believes, listen to a quote by him:

Don’t get attached to any one word. You can substitute ‘Christ’ for presence, if that is more meaningful to you. Christ is your God-essence or the Self, as it is sometimes called in the East. The only difference between Christ and presence is that Christ refers to your indwelling divinity regardless of whether you are conscious of it or not, whereas presence means your awakened divinity or God-essence. – (Eckhart Tolle, The Power of Now, p. 104)

10. Former New Age followers Caryl Matrisciana, Johanna Michaelsen, and Warren B. Smith have renounced and repudiated their former New Age beliefs and have even written books warning others about the New Age. On the contrary, Roma Downey has never renounced her New Age involvement and continues to promote it in one form or another. Interestingly (and significantly), Lighthouse Trails author Greg Reid personally handed Roma Downey a copy of Warren B. Smith’s book, The Light That Was Dark: From the New Age to Amazing Grace at the 2014 National Religious Broadcaster’s Convention right after she finished premiering The Son of God movie. Roma Downey is in a perfect position to warn the church about the New Age, but rather she is bringing the New Age into the church. Greg Reid capsulates this situation well:

Roma and Mark’s open door credentials to the evangelical church is that they are committed Catholics. That, and the movies themselves, were apparently proof enough to the higher leadership of the evangelical churches to give them carte blanche. They have been, 100%, embraced as one of us.

NO ONE has asked the crucial questions: Is Jesus the only way to God? Do we all have the “Christ spirit?” Are we all Divine? Is the Bible the infallible Word of God? Knowing that the Bible forbids necromancy, are you sorry you worked with John Edward? Is what you learned from John-Roger’s University compatible with your Christian faith? Unless Roma and Mark have gone through a massive conversion since last year, then they are still the same people who listen to audio books by New Age Gurus Ekhart Tolle and Tony Robbins, and who follow a brand of spirituality that is so strong that, as Mark said of Roma, “You’re so self-realized you’re practically levitating.”

Why are none of these questions being asked? If we didn’t know, now we do. If leaders DID know and chose to ignore it, or considered these things “little differences,” then God forgive us for our spiritual blindness and willingness to let crucial spiritual darkness enter in for the sake of a movie they think will lead the masses to Christ. (from Reid’s article Son of God—Trojan Horse)