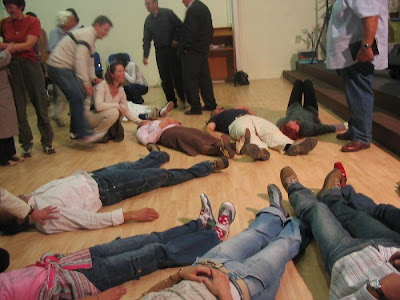 LTRP Note: Because “soaking prayer” is becoming increasingly popular, and because we believe the effects of it are potentially dangerous (kundalini), we are posting this warning by Ray Yungen. As well as the links below this article, we have information on our research site about “soaking prayer.”

Many Christians might have great difficulty accepting the assessment that what is termed Christian mysticism is, in truth, not Christian at all. They might feel this rejection is spawned by a heresy hunting mentality that completely ignores the love and devotion to God that also accompanies the mystical life. To those who are still skeptical, I suggest examining the writings of Philip St. Romain, who wrote a book about his journey into contemplative prayer called Kundalini Energy and Christian Spirituality. This title is revealing because kundalini is a Hindu term for the mystical power or force that underlies Hindu spirituality. In Hinduism it is commonly referred to as the serpent power.

St. Romain, a substance abuse counselor and devout Catholic lay minister, began his journey while practicing contemplative prayer or resting in the still point, as he called it. What happened to him following this practice should bear the utmost scrutiny from the evangelical community–especially from its leadership. The future course of evangelical Christianity rests on whether St. Romain’s path is just a fluke or if it is the norm for contemplative spirituality.

Having rejected mental prayer as “unproductive,”1 he embraced the prayer form that switches off the mind, creating what he described as a mental passivity. What he encountered next underscores my concern with sobering clarity:

Then came the lights! The gold swirls that I had noted on occasion began to intensify, forming themselves into patterns that both intrigued and captivated me … There were always four or five of these; as soon as one would fade, another would appear, even brighter and more intense … They came through complete passivity and only after I had been in the silence for a while.2

After this, St. Romain began to sense “wise sayings” coming into his mind and felt he was “receiving messages from another.”3 He also had physical developments occur during his periods in the silence. He would feel “prickly sensations” on the top of his head and at times it would “fizzle with energy.” This sensation would go on for days. The culmination of St. Romain’s mystical excursion was predictable–when you do Christian yoga or Christian Zen you end up with Christian samadhi as did he. He proclaimed:

No longer is there any sense of alienation, for the Ground that flows throughout my being is identical with the Reality of all creation. It seems that the mystics of all the world’s religions know something of this.4

St. Romain, logically, passed on to the next stage with:

[T]he significance of this work, perhaps, lies in its potential to contribute to the dialogue between Christianity and Eastern forms of mysticism such as are promoted in what is called New Age spirituality.5

Many people believe St. Romain is a devout Christian. He claims he loves Jesus, believes in salvation, and is a member in good standing within his church. What changed though were his sensibilities. He says:

I cannot make any decisions for myself without the approbation of the inner adviser, whose voice speaks so clearly in times of need … there is a distinct sense of an inner eye of some kind “seeing” with my two sense eyes.6

St. Romain would probably be astounded that somebody would question his claims to finding truth because of the positive nature of his mysticism. But is this “inner adviser” St. Romain has connected with really God? This is a fair question to ask especially when this prayer method has now spread within a broad spectrum of Christianity.

This practice has already spread extensively throughout the Roman Catholic and Protestant mainline churches. And it has now crossed over and is manifesting itself in conservative denominations as well–ones that have traditionally stood against the New Age. Just as a tidal wave of practical mystics has hit secular society, so it has also in the religious world. St. Romain makes one observation in his book that I take very seriously. Like his secular practical mystic brethren, he has a strong sense of mission and destiny. He predicts:

Could it be that those who make the journey to the True Self are, in some ways, demonstrating what lies in store for the entire race? What a magnificent world that would be–for the majority of people to be living out of the True Self state. Such a world cannot come, however, unless hundreds of thousands of people experience the regression of the Ego in the service of transcendence [meditation], and then restructure the culture to accommodate similar growth for millions of others. I believe we are only now beginning to recognize this task.7

A book titled Metaphysical Primer: A Guide to Understanding Metaphysics outlines the basic laws and principles of the New Age movement. First and foremost is the following principle:

You are one with the Deity, as is all of humanity â€¦ Everything is one with everything else. All that is on Earth is an expression of the One Deity and is permeated with Its energies.8

St. Romain’s statement was, “[T]he Ground [God] that flows throughout my being is identical with the Reality of all creation.”9 The two views are identical!

St. Romain came to this view through standard contemplative prayer, not Zen, not yoga but a Christian form of these practices. The lights were also a reoccurring phenomenon as one contemplative author suggested:

Christian literature makes reference to many episodes that parallel the experiences of those going a yogic way. Saint Anthony, one of the first desert mystics, frequently encountered strange and sometimes terrifying psychophysical forces while at prayer.10

Unfortunately, this experience was not confined to St. Anthony alone. This has been the common progression into mystical awareness throughout the centuries, which also means many now entering the contemplative path will follow suit. This is not just empty conjecture. One mystical trainer wrote:

Without the mystical connection there can be no oneness. The second always follows the first. Here lies the heart of occultism.

This issue is clearly a serious one to contend with. Many individuals, using terms for themselves like spiritual director, are showing up more and more in the evangelical church. Many of them teach the message of mystical prayer.

“I Just Had a Vision” by Kevin Reeves