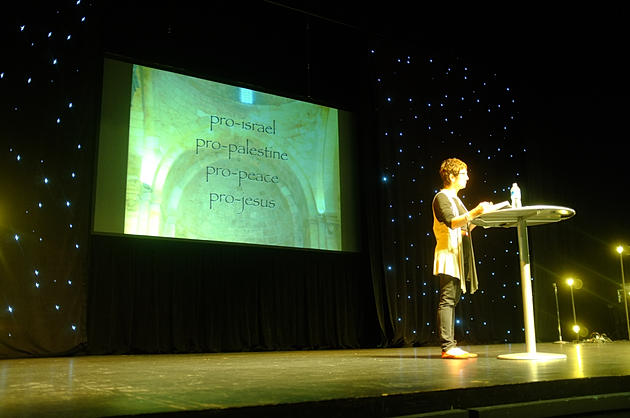 Lynne Hybels is a woman of vast influence in the evangelical world. She and her husband, Bill, founded Willow Creek Community Church in 1975; today the Willow Creek Association (9,000 member churches worldwide) is one of the most influential groups in Christendom. Willow Creek’s annual “Leadership Summit” often hosts speakers well outside of evangelicalism’s mainstream. Even a cursory examination of the Hybels’ worldview reveals a strong lean toward so-called “Progressive Christianity” (example: hosting speakers like Bill Clinton and Tony Campolo).

In the past few years, Lynne Hybels has become an activist for all sorts of causes, including the crisis in Congo, Christian persecution in the Middle East, and the Arab-Israeli conflict. . . .

Since the ‘70s, Lynne Hybels and her husband have been mentored by people sympathetic to the Palestinian Narrative, including Dr. Gilbert Bilezikian. In October 2008 she attended a conference in Amman, Jordan, led by Arab Christians from “Jordan, Lebanon, Egypt, Iraq and the West Bank.”

Since that time, Lynne Hybels has been very active in promoting the so-called “Palestinian Narrative,” which points to Israel as an occupier of Arabs. The narrative is classic PLO (Palestine Liberation Organization) propaganda, but Hybels’ networks allow her the luxury of promoting this worldview—couched in the language of “non-violent resistance”—which is also shared by Millennial influencers such as Donald Miller and Cameron Strang.

(Both Miller and Strang have accused Israel, in print, of virtual war-crimes, including the harvesting of organs from Palestinians, and outright murder of Palestinian women and children by the IDF. To date, Miller in particular offers no documentation for his allegations.)  Click here to continue reading.