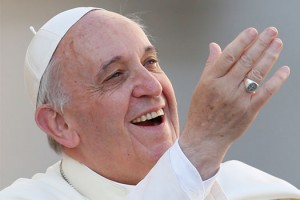 I am cautious about “pinning the tail” on the Antichrist and the False Prophet.  We cannot know ahead of time who these personalities are; however, Pope Francis comes close to “filling the bill” on the False Prophet. Or he may be but a “type” of that man just like there are many “types” of the Antichrist throughout history. I think the devil has always had a candidate for the Antichrist waiting in the wings as he doesn’t know when the final generation is.

Pope Francis is revealing himself to be a blatant Marxist. He has also pulled back from issues Catholics have considered sacred. He apparently has replaced abortion with social justice and environmentalism. Most troubling, however, is his call for a “new world order” and that there be a global constitution, a global court and a one-world government. Scripture is clear that the Antichrist will be the head of a one-world government (Revelation 13).

Even conservative Catholics are sounding a warning that Pope Francis–the first Jesuit Pope–may be the most troubling Pope ever. He is raising apocalyptic concerns and some in the eschatological community feel that he, indeed, has gotten the nod to be the False Prophet.

Roger Oakland, an apologist on Catholic doctrine, writes, “According to Bible prophecy, a one-world religion that will offer the promise of peace throughout the world is going to commence prior to Christ’s return. To most, this global body will seem like a wonderful thing and very possibly will be a pseudo-Christianity (coming in the Name of Christ); however, contrary to how the masses will view it, it will actually help establish and set up the Antichrist and his one-world government.”

He continues, “In order for this to happen, all religions must come together in an ecumenical plan. Today, as part of this Satanic scheme, the evangelical/Protestant church is being drawn seductively into the Roman Catholic Church, largely through what we call ‘the Jesuit agenda.’ Incredibly, while the evidence is obvious to some, the majority of proclaiming Christians are not at all aware it is happening.”

Oakland concludes, “So what should we expect if we are in the time when such a system unfolds? First, many who once were Protestant and Evangelical will become ecumenical. Second, all religions will unite in solidarity of purpose. Understanding the Jesuit agenda is essential if we are to understand how this worldwide deception will come about.”

Jan Markell is the founder and director of Olive Tree Ministries. Her radio program airs on 700 radio stations across America. She is the co-author of Trapped in Hitler’s Hell.