The 2015 Parliament of the World’s Religions was held October 15-19 in Salt Lake City, Utah. They estimated over fourteen thousand people attended this New Age (now called “interfaith”) convention at the cost of $500/person. This convention was well advertised for over a year.

Many booths from differing faiths, political interfaith organizations, and seminaries were anxiously handing out their free literature and books to attendee’s as they walked through.

As we made our way through the halls we saw Buddhist/ Hindu shrines and rooms filled with chanters. Tables were selling their t-shirts, books, sandalwood meditation beads, jewelry and pictures of the Dali Lama. 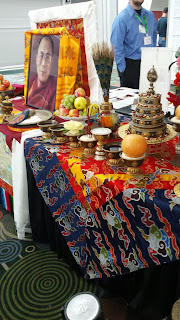 We were subjected to a constant hum of a drum and high pitched sounds ringing throughout the building, with signs hanging overhead that read “The earth is one we are one with the earth.”

Environmental issues were a big topic because they believe we are part of the earth, and if the earth is sick we cannot heal the world.

There were Indians dressed in their headdresses and clothing, seiks, Buddhist monks, Catholic priests, Jewish rabbis and, yes, Christians alike, jamming through halls to attend sessions. Media with their cameras conducted interviews, spiritual dancers in the background chanted, while late speakers were running up escalators to indoctrinate the masses. Most of the participants and speakers were women. 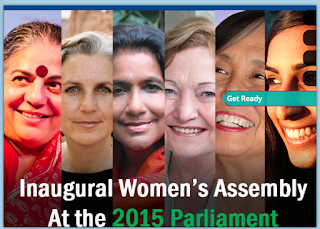 Many of us have read books, or articles about the New Age movement; however, the focus of the New Age has mostly been covert via networking, infiltration, and spiritual indoctrination, especially so far as their goal of uniting the world under a one world religion and one world government.

The Parliament of the World’s Religions has an agenda and they are now very open about it. It is now an outright attack on the Christian church and the Word of God. They have decided they cannot have unity at all cost so they are trying something else: changing the doctrine of the simple Gospel of Jesus and Who He is. I was handed a booklet titled Global Ethic: A Call to our Guiding Institutions that stated: “The Parliament of the world’s religion seeks to promote interreligious harmony, rather than unity.” (p.1)

They are not afraid to say that “an orthodox Bible believing Christian does not fit in our world nor will they be tolerated.” It was in our face. This Parliament is a sort of coming out of the closet for them, as was the Parliament’s in the past such as the one in 2009.

One of the signs that hung in the hall said, “Choose being kind over being right and you’ll be right every time.” Still another displayed, “We are as much alive as we keep the earth alive.” So the truth of the Word is not on their agenda. It is seen as unorthodox and mean-spirited. For example, note the phrase in blue below:

I attended several sessions to get a grasp on the coming agenda of attacks on the Bible-believing church. I attended these sessions reluctantly, biting my tongue, but I noticed several phrases repeated over and over – to the point I stopped attending the third day as I could recite the chant by heart!

The Christian view of “salvation” has the inclusion/exclusion message of “we are in – they are not.” The interfaith movement cites this as an evil. In other words, to say Salvation is by Christ alone, and there is a Hell and there is a Heaven is not accepting of other faiths. It is exclusive, unaccepting of other religions, especially because they believe “God accepts all, God is in all.” The Christian orthodox view of Heaven and Hell will no longer be tolerated as they says it divides humanity.