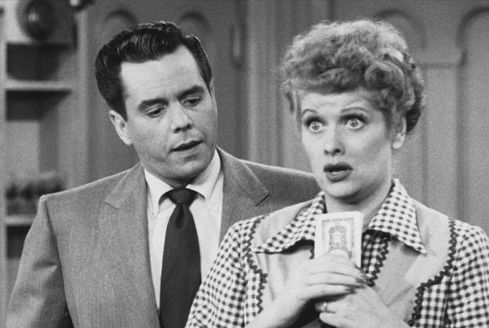 From the I Love Lucy! show

You can’t find a greater difference in TV shows than I love Lucy and the television programs of today. People asked for more Bible type programs, what they got is a TV program with the last character they wanted to see from the Bible. This new show brought to the public from the conservative network Fox (not on Daystar network yet), casts Satan as a hero seeking redemption. TV entertainment has reached a new low with a series called Lucifer. Is it a comedy, a drama, fantasy or reality TV… or, is it a combination of all?

What was unthinkable 15 -20 years ago is now blatant in your face mockery of the bible as a TV program. Lucifer quits his job in Hell because of boredom, and now lives in the city of Los Angeles (city of fallen angels; where else?). The Devil does something different, he’s doing good.

Across the screen come the question, “What if the Devil DECIDED TO QUIT” …

“If” being the mendacious question. Satan is not going to quit, because he was never hired; and he’s no Hollywood actor. The devils real purpose is to deceive humanity which will continue until Jesus’ return; He does not quit but is stopped by being defeated. But I don’t think that will be the conclusion of this TV series.

This Devil has a British-accent, he is well-dressed, handsome, debonair, charming and clever and acts like a gentleman. Prime time television now has “Lucifer portrayed” as a nice guy for your entertainment and they want viewers for years as the new and improved image influences the audience.

Here’s the story line: He abandons his kingdom for the beauty of Los Angeles, where he tries to make amends helping the LAPD punish criminals. He becomes a police consultant to take down criminals by working with the law.

The Devil’s reformation begins after a conversation with a pop star who attributes her success to selling her soul to the Devil. Lucifer then informs her that she did not do this, though he granted her one “favor” early in her career (Implication is that there is no such thing). In the pilot this singer he tried to help is murdered by a drug dealer, he uses his powers of persuasion to assist the police in solving the crime; Detective Decker in apprehending the murderer.

He uses his unique abilities to bring out peoples secrets, he knows people’s inner thoughts and deepest desires. Lucifer takes an interest in Chloe Decker is an LAPD homicide detective who appears immune to his abilities. She ends up solving crimes with Lucifer’s help.

Besides a few general references, there is no mention of the Lord or Jesus on the show. All things considered that’s a good thing. So far no atheist has complained. But then should we expect them to when its not really teaching the Bible. Click here to continue reading.