Evangelical/Ecumenical Leaders Together in “The Gathering” Raises Serious Questions

On June 13, Lighthouse Trails reported on an event called Together 2016 that will take place this summer in Washington DC. We explained that organizer Nick Hall was bringing together evangelical, emerging, charismatic, and Catholic leaders for the ecumenical purpose of uniting together. A special video appearance by Pope Francis will be part of the event. A similar event (but without the Pope) has been announced. The Gathering: A National Solemn Assembly will take place in September in Dallas, Texas, and while there doesn’t appear to be any direct promotion of the Roman Catholic religion as there is with Together 2016, there is a definite united-we-stand-regardless-of-our-beliefs scenario in The Gathering.

The Gathering motto is “One Vision, One Voice, One Agenda.” The mission statement says:

The Gathering has one purpose: to unite the Body of Christ in America – all believers, regardless of race, age, or denomination – in prayer for forgiveness, wisdom, and provision for our nation.

To further explain its purpose, The Gathering website states:

National revival must begin in the heart and in the home before it can spread throughout communities and nations.

But a question that begs an answer is: What would “national revival” look like considering the condition of the church and its leaders today?

For example, James Robison, one of the speakers at The Gathering, has shown on many occasions his ecumenical stance with regard to the Catholic Church. For instance, Robison stated in 2014: “I believe there is an important spiritual awakening beginning in the hearts of those truly committed to Christ in the Protestant and Catholic communities. Is it possible that Pope Francis may prove to be an answer not only to the prayers of Catholics, but also those known as Protestants?” (emphasis added) (*see below)

At least two of the speakers at The Gathering, Priscilla Shirer and Max Lucado, promote contemplative spirituality  (a belief system that Christian leaders continue to ignore even though it has been the cause of New Age occultic practices coming into the church).

Two of the speakers at The Gathering – Greg Laurie and James Robison – have both endorsed a book by Steve Berger, Have Heart, in which Berger promotes the idea of necromancy.  Laurie has also promoted the ecumenical Rick Warren on different occasions – see more)

Ann Graham Lotz (another Gathering speaker) recently sent out a letter to her followers promoting prayer circles and an ancient mystic named Honi. When she was challenged about this, she responded by defending her statements on Honi and prayer circles. We are not saying this suddenly makes Lotz a contemplative advocate, but why would a Christian leader promote a ritual of prayer circles yet say nothing of warning about mystical practices that have entered the church?

Nick Hall (another Gathering speaker) is the man who is directing the Together 2016 that will occur in July in Washington DC, in which Pope Francis will deliver a video message of unity. There’s no question about his ecumenical persuasions. 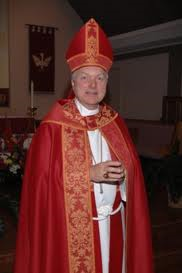 Bishop Ray Sutton of The Gathering is Dean of the Province and Ecumenical Affairs of the Anglican Church in North America and is involved in a number of ecumenical (road to rome) activities. Sutton also advocates for the Catholic transubstantiation of the communion elements (a re-crucifixion of Christ) (click here and here for some more information on Sutton).

And last, Gathering speaker Leith Anderson is an early pioneer in the emerging church movement. Anderson once said:

The only way to cope and be effective during this period of structural change in society is to change some of the ways we view our world and the church. It is what some call a paradigm shift—a new way of looking at something. Such a shift will allow us to view our changing world with new perspective. It is like a map. Old maps from 1950 may have sufficed before the construction of interstate highways and the expansion of major cities, but new maps are needed now. Likewise, we need a paradigm shift for the future. (A Church for the 21st Century, p. 17).

Sadly, the evangelical church has gone through that paradigm shift now and presents a “new” Christianity (progressive, emerging, ecumenical, contemplative).

Christian leaders are hoping for a “spiritual” or “national awakening,” but how can the nation be awakened spiritually (and biblically) when Christian leaders are leading “the Body of Christ in America” in the wrong direction and not in a manner that is in accordance with the Word of God?

How is it so many Christian leaders find it so vital to show spiritual comradeship with all people, thinking this is how the world can be saved? We’re not talking about humanity sharing a common kindness and respect toward one another or about people of different social, racial, and political views working together in various projects and efforts. We are talking about spiritual unity. While a Christian can (and should) live together in peace and harmony among fellow humans as much as is possible, there cannot be spiritual communion or fellowship with those outside the biblical faith (which is that faith solely focused on the Gospel message of Jesus Christ through His atoning work on the Cross as the only means of salvation).

How can Christian leaders help our nation when so many of them are deceived themselves and partaking in (whether they realize it or not) blurring the lines that separate the Gospel of Jesus Christ from every other belief system? At the risk of upsetting people who admire and follow some of these leaders, these figures have become the blind leading the blind. They promote all kinds of dangerous and unbiblical ideas, books, practices, and people and show no remorse, humility, or willingness to change when they are challenged for doing these things. These things ought not to be so by those claiming to be the leaders of the Christian church.