As we observe evangelical Christianity being drawn toward “the Mother Church” of Roman Catholicism, it is amazing to see how very few Christian leaders speak up about this. On the contrary, one after the next, Christian leaders are succumbing to this ecumenical, interfaith last-days apostasy of merging evangelicalism into the Catholic fold. Lighthouse Trails has reported on numerous examples of highly influential evangelical leaders heading in this direction: Rick Warren, Beth Moore, James Robison, and Ken Copeland to name a few.

Today, we received two different e-mails that provided information to show the continuance of this evangelical move toward Rome. In the first e-mail sent by Roger Oakland of Understand the Times, Calvary Chapel Costa Mesa senior pastor Brian Brodersen was brought to our attention. Brodersen is beginning an online YouTube series called Things That Matter. In his introductory segment, he explains that this new show is going to help believers see “the bigger picture of Christianity.” He says that too often Christians focus on issues that are not important. As we listened to his words, we couldn’t help but be reminded of the words of emerging church pioneer, Leonard Sweet, when he said:

“Christ is in the Church in the same way as the sun is before our eyes. We see the same sun as our fathers saw, and yet we understand it in a much more magnificent way.” (Aqua Church, p.39, emphasis added)

Sweet was actually quoting Pierre Teilhard de Chardin when he said this as Warren B. Smith points out in his book, A “Wonderful” Deception. What is this “more magnificent way” to which Sweet refers? We know what Chardin means by this, and based on our research on Leonard Sweet and the emerging church, Sweet concurs with Chardin. The “more magnificent way” of seeing things is the paradigm shift that brings all religions together as one, removing all “barriers,” and ultimately leading man to believe he is Divine.

Some may say this is a stretch to suggest that Brian Brodersen is thinking this way just because he says “the bigger picture of Christianity.” But is it really a stretch? As we reported earlier this year, Brodersen recently came out publicly promoting the Alpha Course leader, Nicky Gumbel, who is practically in the arms of the papacy and will take millions of Alpha Course participants with him. It was no small thing that a leading Calvary Chapel pastor endorsed Gumbel and the Alpha Course (if you aren’t sure what to think about the Alpha Course, read our recent article by Mary Danielsen and Chris Lawson). While Brodersen is not proclaiming that man is Divine, whether he realizes it or not, he is helping to remove the barriers between evangelical Christianity and Roman Catholicism.

What is this “bigger picture of Christianity” that Brodersen is talking about? Is he just talking about the Christianity that is beyond the Calvary Chapel borders? Of course not; that would be nothing new as many Calvary Chapel pastors, including CC’s founder Chuck Smith have acknowledged that the body of Christ includes believers outside of Calvary Chapel. Calvary Chapel has never claimed that the body of Christ was solely within their own walls. Time will tell what exactly Brodersen means by this “bigger picture of Christianity.” However, from our perspective, it stands to reason that Brodersen’s remarks would resonate with Rick Warren’s when Warren has stated on numerous occasions that Christianity does include the Catholic Church and that we should focus more on what we have in common than in what we don’t. In other words, the bigger picture of Christianity. That is what Warren means. In Brodersen’s Things That Matter segment, he expressed his concern that some in the body of Christ are focusing too much on “non-essential” issues. We are curious as to what those “non-essential” issues are, and we suspect one of those will be criticizing the Catholic Church.

The second e-mail we received today was regarding Calvary Chapel’s leading pastor Greg Laurie. The e-mail stated: “As a former attendee at Harvest Christian Fellowship [Laurie’s church], it saddens me that Pastor Greg gives validity to Mel Gibson. This post was on Pastor Greg’s Instagram.” The Instagram our reader was referring to shows a photo of Greg Laurie, his wife, and Hollywood actor Mel Gibson. 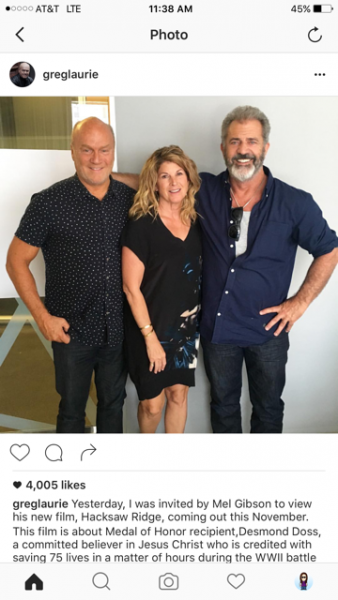 While this may seem to be of no significance at first glance, the message that Laurie included in his Instagram also stated: ” I have good news; this dynamic duo [Gibson and Randall Wallace] is working together on a follow-up of the epic film on the crucifixion of Jesus, The Passion. . . . I am really looking forward to a long-overdue movie about this topic from the man who created a whole new template for telling a biblical story on film, Mel Gibson.” 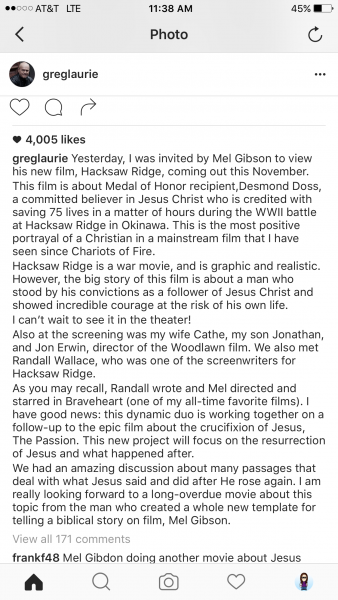 As veteran author and teacher Roger Oakland has documented in his book, Another Jesus, The Passion film was an attempt by Mel Gibson to “evangelize” evangelicals and drawn them “back to the Mother Church.” As Oakland pointed out, Gibson said:

Oakland also wrote “The Passion of the Christ Motives Revealed” that brings out more evidence from Gibson himself that The Passion was intended to draw non-Catholics to the Catholic Church. Oakland stated:

One of the statements Mel Gibson made (brought out in Oakland’s article) regarding this Definitive Edition of The Passion was about Mary. Gibson stated: “[S]he was cooperating with this, salvific work. I tried to make that obvious.” You can read several other statements by Gibson with regard to his  motive in doing The Passion in the article above.

Read this extract from Another Jesus titled “What Lies Behind Mel Gibson’s The Passion of the Christ,” and you will see that The Passion was an effort to bring “modern audiences” into the Catholic fold. There’s little doubt that Greg Laurie knows of this information from Roger Oakland. Roger was virtually the only Calvary Chapel figure (when he was part of Calvary Chapel) opposing the raving support the evangelical church was giving The Passion when it came out, and he was severely criticized for his opposition; and at the 2005 Calvary Chapel senior pastor’s conference in Murrieta, California, with Chuck Smith’s permission, a copy of Another Jesus was given out to each pastor in attendance.

Laurie’s recent praise on Instagram of Mel Gibson and The Passion isn’t the first time Laurie has shown that he sees “the bigger picture of Christianity.” In 2015, he publicly promoted New Age Catholic Roma Downey.2 And in 2011, there was the LifeFest event where he had no problem sharing a platform with a Catholic priest as you can read in our article “Green Bay Catholic Priest David Ricken leads Mass at Lifefest Before Joint Worship with Greg Laurie” and Roger Oakland’s article “The Pope’s New Evangelization Program: Bishop Ricken, Greg Laurie and Calvary Chapel. ” And, of course, most recently, we reported on The Gathering 2016 taking place this fall where Laurie and other evangelical leaders are coming together in an ecumenical event that has at least one pro-Catholic speaker.

There are too many instances to ignore anymore where Christian leaders are saying OK to joining up with the Roman Catholic Church. And sadly, there is too much silence and apathy from the ranks of the evangelical/Protestant camp. Few voices are speaking up, and when those voices are silenced, all that will be left will be the bigger picture of a false Christianity.