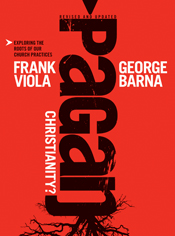 December 7th, author Frank Viola reposted an interview he did with co-author George Barna on their book Pagan Christianity. http://www.patheos.com/blogs/frankviola/georgebarnainterviews. Therefore, Lighthouse Trails is reposting the critique on that book written by our  free-lance writer Philip Gray. Viola and Barna believe that book will help bring about a new reformation to the church. Unfortunately, the reformation the emergents are bringing about is not a reformation from God. This book is a perfect example of that.

Basically, according to Pagan Christianity,  if you are a Christian and you have been participating in any of the following activities, you have been practicing paganism:

After reading this list, how did you rate on that? How many of these activities are you guilty of? Did you go to church last Sunday? Did you put on your best outfit? Did you listen to a choir sing? Did that neighbor you bring respond to an altar call to give his life to Jesus Christ? Did you sit and listen to your pastor teach or preach the Word? Well, according to Pagan Christianity, if you did, you are more like a pagan than a Christian. Of these activities, Barna and Viola say: “Such practices are foreign elements that God’s people picked up from their pagan neighbors” (p. xx).

The point of this review is not to defend all of these practices in and of themselves. The point is to show that this book is another subtle stab at traditional Christianity, a stab that attempts to make Christians feel guilty for just about everything they do that has to do with going to church . . . everything that is, that is external. This book has absolutely nothing to do with the heart condition of man, nothing to do with sin and repentance, but is merely a smoke screen to cover up the real issues that are plaguing the church today. For whether one dresses up for church or not, whether one gives a sermon or not, whether one sings or not, whether one gives an offering or not, and whether one sits in a pew or not, the issue that God looks at is the condition of the heart and not the outward appearances. One can sit in a pew and have evil intent in his heart; another can sit in a pew and be a godly humble man of God. It’s not the pew that makes him one or the other.

Pagan Christianitysays that “the great bulk of first-century practices have been removed from the Christian landscape.” The book tells readers that “such practices are presently being restored on a small scale by those daring souls who have taken the terrifying step of leaving the safe camp of institutional Christianity” (p. xviii). But the book never really tells us what those practices are, except to continually say it is something spectacular that excludes the above activities and includes small groups of people who stand around in circles, embracing, and sharing with one another their various thoughts, feelings, songs, prayers, and ideas – according to Viola and Barna, that is what makes a person a good New Testament Christian.

While there is certainly nothing wrong, in and of itself, for a group of people to stand in a circle and share with one another, it is not a guarantee that the group of people will be abiding in God’s will in their lives. And, in fact, if Viola’s and Barna’s recipe for proper Christian living is acted upon, that group of people in the circle is probably going to be in trouble because rather than having the Word of God taught to them or preached to them by those who are called into the office of teacher or pastor, they will be “dialoguing” with one another, asking a lot of questions, and never coming up with any answers (because the postmodern isn’t supposed to have any actual answers – having answers offends).

What is the real agenda of Pagan Christianity? Well, this much we can say, it sure isn’t to warn believers against true pagan practices and beliefs such as eastern-style meditation, walking through labyrinths, doing yoga, focusing on the breath, rejecting the atonement, and so forth. In a day when spiritual deception is at an all time high, when growing numbers of Christian leaders, churches, schools, and organizations are falling into the trap of practicing, promoting, and embracing mysticism and other New Age practices (disguised with Christian terminology, by the way), it hardly seems appropriate and wise to tell Christians to stop sitting in pews, stop having sermons (and pastors for that matter), stop meeting in buildings, end all Sunday School lessons, and by all means stop dressing up on Sundays.

Perhaps what is most distressing about this book is that there is an underlying sentiment that the “preaching” and teaching of God’s Word is not a New Testament practice and should be done away with. Perhaps this is the real message of Pagan Christianity. Rather than have the Word presented and preached as if it is an authoritative source for believers, get rid of all the venues in which it is presented (church buildings, sermons, pastors, pews,pulpits, etc.) as such and turn it into something we can all debate, dispute, question, challenge and reinvent.