By Warren B. Smith

Consistent with many other New Age implications contained in her channeled messages, Sarah Young’s “Jesus” introduces the New Age idea of “God’s Dream” in Jesus Calling when he states:

I may infuse within you a dream that seems far beyond your reach.1

In Jesus Calling: 365 Devotions for Kids, the January 6th message/devotion is titled—and has “Jesus” telling the children—“Dare to Dream My Dream.”2

“God’s Dream” is a Deceptive Scheme
The term “God’s Dream” is yet another part of the overlapping New Age language streaming into the church. God’s Dream is a vague, loosely defined New Age metaphor that attempts to unify different religions and faith groups in an unbiblical effort to attain world peace. However, the true Jesus Christ warned that deception and the coming of Antichrist—not a “God’s Dream” peace movement—will be what actually precedes His ultimate and glorious return (Matthew 24:3-5; 2 Thessalonians 2:1-5). The prophet Daniel warned that Antichrist will “destroy wonderfully” and “by peace he shall destroy many” (Daniel 8:24-25). In the future, what may appear to be a “wonderful” worldwide revival and a “wonderful” world peace will actually be a false revival and a false peace—the kind of peace that Daniel said will be associated with the coming of Antichrist, not the true Christ. 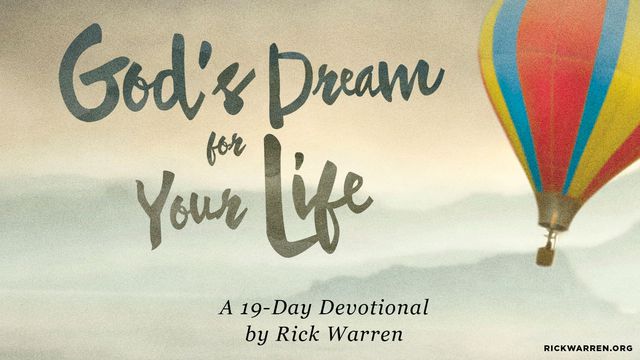 The New Age concept of God’s Dream was introduced at least as far back as 1916 by New Age theosophists in their Theosophical Path Magazine.3 Since then, it has been used by numerous New Age sympathizers that include Oprah Winfrey,4 Wayne Dyer,5 former United Nations Indian guru Sri Chinmoy,6 and African bishop Desmond Tutu.7 The concept of God’s Dream was introduced into the church in the 1970s by former Crystal Cathedral pastor Robert Schuller8 and later adopted by Rick Warren,9 Brian McLaren,10 Joel Osteen,11 Bruce Wilkinson,12 Leonard Sweet,13 and many other Christian figures. The overlap factor is very apparent when comparing statements made by Oprah Winfrey, Joel Osteen, and Sarah Young’s “Jesus” :

Joel Osteen: God’s dream for your life is so much bigger than your own.15

Sarah Young’s “Jesus”: Dream your biggest, most incredible dream—and then know that I am able to do far more than that, far more than you can ever ask or imagine. Allow Me to fill your mind with My dreams for you.16

Rick Warren: This weekend, I’ll begin a series of five messages on God’s dream to use you globally—to literally use YOU to help change the world! I’ll unvail our Global P.E.A.C.E. plan, and how God has uniquely prepared you for this moment of destiny.17

Brian McLaren: That in itself is an act of peacemaking, because we’re seeking to align our wills with God’s will, our dreams with God’s dream.18

“God’s Dream” is a False Dream
“God’s Dream” may seem to be inspirational and have a godly feel to it, but there is nothing in Scripture to even hint, much less substantiate, the New Age concept of God’s Dream. God doesn’t dream in any way, shape, manner, or form. God’s Dream is definitely one of those crossover terms also found in Jesus Calling like “co-creation” and “divine alchemy” that attempt to “shift” everything into a New Age context and toward the universal acceptance of a New Age/New Worldview. Sarah Young’s “Jesus” plays right into this clever conditioning when he introduces the concept of God’s Dream in Jesus Calling and in no less than three of Sarah Young’s other books.20 The prophet Jeremiah warned about those who prophesy and present false dreams like God’s Dream:

Behold, I am against them that prophesy false dreams, saith the LORD, and do tell them, and cause my people to err by their lies, and by their lightness; yet I sent them not, nor commanded them: therefore they shall not profit this people at all, saith the LORD. (Jeremiah 23:32)

Note: Because so many Christian leaders have adopted the concept of God’s Dream, it has become a popularly accepted “Christian” term and is now virtually indistinguishable from its New Age origins.

(This is an excerpt from Warren B. Smith’s booklet The New Age Implications of Jesus Calling.)