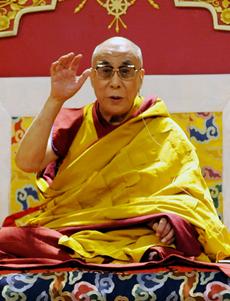 Buddhist spiritual leader the Dalai Lama, leading a ceremony at the University of Minnesota last week, told Chinese students he was a Marxist.
Usually what we hear from the Dalai Lama is an insistant yet soothing voice for compassion and peace.

So Tsering Namgyal, a journalist based in Minneapolis, was jolted by the Dalai Lama’s talk to 150 Chinese students this month at the University of Minnesota. Writing at Religion Dispatches, he says:

Midway through the conversation, His Holiness, much to their surprise, told them “as far as socio-political beliefs are concerned, I consider myself a Marxist … But not a Leninist,” he clarified.

After all, China is constantly pressing to legitimize its takeover of Tibet in world opinion. Meanwhile, the Buddhist spiritual leader is the global symbol of Tibetan opposition and what the opposition considers the obliteration of its independence and religious culture. Click here to continue reading.

How the “Quantum Christ” (God is in everything) is Tranforming the World . . . and Entering the Church!