Guest Commentary: Candles In Worship – Are They OK or Not? 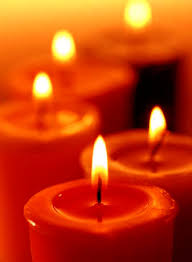 By John Henderson
Author of Revisiting Eden: Prayer the Bible Way and Its Counterfeits
Used by Permission.

It is common practice in churches to have lighted candles as part of the décor of the congregation.  Sometimes, at special times, some may conduct a “candlelight service” that usually illustrates the call of Christians to let their lights shine in the darkness of the world so others may see Christ in us and want to believe.  Of course, that is all in a spirit of demonstration and nothing more is implied by the presence of candles.

I have grown accustomed to seeing a couple of lit candles next to an open Bible on the communion table in front of a pulpit on Sunday mornings. For about the past 50 years, many American churches have adopted the German practice of an Advent Wreath during the Christmas season that involves four smaller candles on the circle of the wreath—each lit on succeeding Sundays beginning four Sundays before Christmas Day and a large one in the center that is lit on the final Sunday at Christmas or the Sunday before.  There is usually a ceremony for each lighting whereby a short devotional about the coming of Christ is presented.

I once sat in a centuries-old church in Germany at Easter, early in the morning before dawn.  They gave us each a very long candle and it was lit as we sat through the service.  I was not able to understand the language and spent most of my time wondering if that candle would last the service.  It was their version of an Easter morning sunrise service for the community.

Some find the use of candles in church for any reason as objectionable. I know they have reasons that make sense to them and am not critical of that.  For my part, I am rather indifferent towards the practice but do not necessarily see it all as a practice in some sort of paganism as has been sometimes claimed.  On the other hand, there are those who will take that simple practice, expand on it, and turn it into a non-Christian entity.  When that happens, I am ready to reject it outright.

The principle that makes sense to me is whether candles or any other accouterments are seen and used as more than setting the mood, as it were, or as mere decoration at best.  We tend to dress differently on Sunday mornings than we do on Sunday evenings.  That is a mood-setter.  We follow a pattern in our services.  That is a mood-setter.  We do a lot of things that set a mood for us that we do not see as necessarily vital to worship.  We do the same kinds of things in a lot of other kinds of environments.  It is called culture.

Consider praying for instance.  The emergent crowd advocates a lot of Eastern mystical methods in what they call praying.  There are some in the postmodern setting that will load up on lit candles all over the place that are intended as more than mood-setters.  They are intended as worship enhancers or even vital to worship and prayer.  Once anything is set up for the purpose of carrying along worship and prayer, you may have crossed a line into a realm that is anything but Christian.

In a postmodern setting, you can find a hodgepodge of things that are designed to carry you along in a shallow worship of self and things and nothing about Jesus as Savior.  Candles are only part of that picture.  You can see a reliance on a transcendental (mystical) approach that merges into a typical contemporary, performance-based worship world.  It may mix the old and new—stained glass and laser lights, communion stations and electric guitars—all with a modern bent meant to reach the unchurched (and overchurched) younger crowd.  Its purpose in reaching them is not for evangelism (leading the lost to Christ) but morphing them into a postmodern band of false Christianity where lives remain unchanged, anything goes, and redemption and repentance means nothing.  It may be accurate to say that postmodern worship is typically a rehash of the 70′s hippie Jesus movement.

Since candles are deemed important in this approach, there are available any number of candle holders designed specifically for “postmodern worship.”  They usually resemble something in the “modern” art category.

Postmodernity in the church is a colliding of cultures, generations, and worldviews where emergent, new age ideas often prevail over Biblical principles.  The postmodern debate “brings an added dimension that makes this situation unique. The effects of postmodernity, on our society and culture beyond the church, force a deeper discussion. It goes beyond a change in methodology and strategy to a deeper, more profound challenging of a particular worldview and the possible ramifications of the huge transformation of the church as we know it.”[1][1]  It is the church that is expected to abandon its “old fashioned” ways in order to “reach” the postmodern generation—a generation that was established outside of the church’s influences in the first place.  Many “evangelical” leaders are taking the bait and plunging those they lead into a deeper lostness—the blind lead the blind and both fall into the ditch.

The paintings, slides, drawings, and candles they use as visual expressions are more to them than mere expressions or mood-setters.  They become mediators of worship.  “Idol” is another name for that.  Once these items become mediators (go-betweens) they displace the Holy Spirit who is the Christian’s only arbitrator of our prayers and Christ who is the Christian’s only mediator before the Father.  The Spirit expresses our prayers before the Father in terms we could never express and Jesus pleads our cause.  And we get to Jesus by coming boldly before the throne of grace, not through candles, guitars, and styles.

I am fine with a couple of candles on the communion table next to a Bible.  I am okay with an Advent Wreath as long as they are no more than symbolic mood-setters or decorations.  If they ever become thought of as mediators, then I had rather never see another candle or wreath in a church.  To me, it is like Paul’s discussion on eating meat offered to idols.  The meat is fine but it is better to not eat such meat if there is a brother whose faith in Christ is weakened by my doing so.

What does Roger Oakland have to say about candles and the emerging church? Read this excerpt from chapter 1 of Faith Undone:

(from chapter 1, Faith Undone): So what is so bad about overstuffed couches, sweet smelling candles, and sipping cups of hot espresso during a church service? Why are people making such a big deal about changing the atmosphere, returning to a more simplistic style of worship, and asking questions about truth and God?

It is not the ambience (flavor or feel) of the emerging church that causes me to write this book. It is the theological underpinnings. Anyone involved with the emerging church knows it’s about a lot more than just candles, incense, and darkened rooms. Listen to the comments made by three different participants who explain what they think the movement is about:

It’s really not a rebellion so much as it’s just finding a new set of answers, a different way of being Christians.

I think it is a movement that will have an impact on all churches in the United States. (quotes from: http://wwrn.org/articles/22112/?&place=united-states&section=other-groups)

But is this “new reformation” actually the way God has instructed us to go? The Bible warns that in the days before Jesus Christ returns, truth will be abandoned for a wider spiritual road that gives “heed to seducing spirits, and doctrines of devils” (I Timothy 4:1). A new form of Christianity will replace biblical faith with a faith that says man can find his own path to God and create a perfect kingdom of God here on earth. The Word will become secondary to a system of works and rituals driven by ancient mystical experiences.

An ecumenical pattern toward unity with other religions has already become quite apparent. Many people will consider those who refuse to embrace this direction as spiritual oddballs who need to be reprimanded. These resisters who stand up for biblical faith will be seen as obstructions to a one-world spirituality and global peace. Yes, I know these sound like preposterous concerns. Besides, how could a movement such as the emerging church, which seems so unorganized, do so much damage?

A common technique to changing society (or the church) is to repeat an assertion over and over as fact; once people have heard a statement enough times, they come to believe it is true. They even parrot the statement in their own conversations, eager to appear in the know. Oh, how we need to answer every assertion with, “Says who?” This book examines the underlying spiritual substance of the emerging church movement as Scripture tells us to, “Prove all things; hold fast that which is good” (I Thessalonians 5:21).